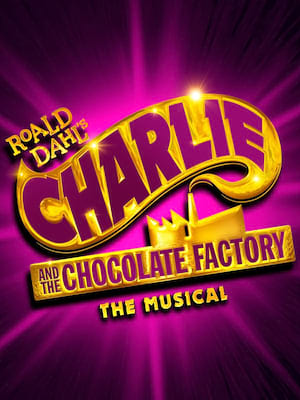 All logos, graphics and images are property of the production

Charlie And The Chocolate Factory

A bumper box of entertainment, with a golden wrapper and plenty of Whipple-Scrumptious surprises!

Why See Charlie And The Chocolate Factory?

Based on the classic book by Roald Dahl, Charlie and the Chocolate Factory is a spectacular journey into the weird and wonderful world of sweet impresario Willy Wonka. Following a hugely successful West End run from 2013 to 2017, the sweet treat finally takes to the road in 2023, giving audiences across the UK the chance to step into its world of pure imagination.

Charlie and the Chocolate Factory boasts a score by Marc Shaiman and Scott Wittman, the ridiculously talented writing duo who won a Tony Award in 2002 for their work on Hairspray. Alongside their original numbers, this production also retains the classic song Pure Imagination, which was written for Mel Stuart's 1971 movie version.

Reclusive inventor Willy Wonka is opening the doors to his world-famous chocolate factory, but only a lucky five children will be allowed in. To win a place, they must discover one of the five golden tickets hidden inside the wrapper of a Wonka bar. To enter Wonka's factory would be a dream come true for young Charlie Bucket, but given neither he or his grandparents who take care of him can afford a Wonka Bar, it seems like a dream that will never come true. That is until one day when a couple carelessly drops some money which lands at Charlie's feet. Rushing into the nearest shop, Charlie buys a solitary Wonka bar and low and behold, there's something gold glittering under the wrapper.

And so Charlie is one of the chosen few who steps into the chocolate factory, a realm of candy-covered delights and confectionery beyond your wildest dreams.

While it is now considered a family favourite, the 1971 movie version received a mixed reaction upon its release, not least of all from Roald Dahl himself. The author was not a fan of Gene Wilder's portrayal of Willy Wonka, and would have much preferred his actor of choice, Spike Milligan, to have played the part.

Two hours and 30 minutes with one interval

Seen Charlie And The Chocolate Factory? Loved it? Hated it?

Sound good to you? Share this page on social media and let your friends know about Charlie And The Chocolate Factory at Edinburgh Playhouse Theatre.