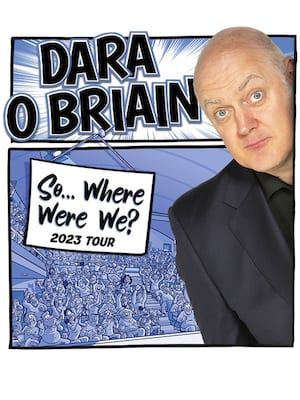 There are no grinding gears as O'Briain cruises from one subject to the next. The callbacks aren't just cheap tricks; they thread the show together...The springs and cogs are expertly wound; everything detonates precisely when it's supposed to.

After a successful mammoth stint touring over two years across 20 countries, Dara O Briain deserved a break, but now he's back with a brand new show 'So, Where Were We?'. He's one of Britain's most recognizable faces thanks to appearances on Mock The Week, Robot Wars and Star Gazing Live, he returns to his live comedy roots, bringing a whirlwind of erudite humor and fast-talking wit along for the ride.

Don't worry, the 'So, Where Were We' tour will hardly mention any of the events which consumed the last year and a half because quite frankly we're all bored of hearing about it. Instead, you'll be treated with his hilarious one-liners and the usual mix of stories.

Jumping from one stream of consciousness to another like lightning, O'Briain may at first seem like the chucklesome ravings of a mad man, but once a pattern emerges the chaotic energy becomes an intricately woven tapestry of puns, gags, and hilarious anecdotes. Whether ranting about middle-age man problems or regaling the crowd about the time he wound up in a burlesque bar in Perth with a Glaswegian dancer and a biker gang, this funnyman is a knows a thing or two about crafting an engaging and satisfying routine.

Sound good to you? Share this page on social media and let your friends know about Dara O'Briain at Edinburgh Playhouse Theatre.