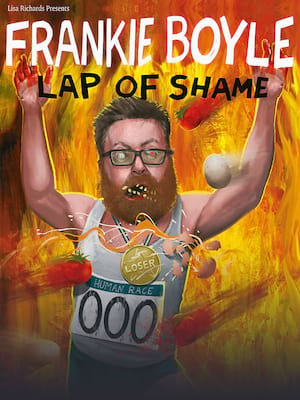 Frankie Boyle's on tour. Buy a ticket, because by the time he arrives, the currency will be worthless and you and your neighbours part of a struggling militia that could probably use a few laughs.

The phrase 'no stranger to controversy' may well have been coined for the Scottish comedian, but with comedy often held up as the last bastion of free speech, his shocking (and hilarious) observations often carry a stark message to society. Taking to the road once more in 2023, don't miss the straight-talking star of Mock The Week (RIP) as he brings his new show to venues across the UK. You have been warned.

Since beginning in 1995, Boyle has steadily become one of the most recognised comedians in the UK. With five stand-up specials, myriad television appearances and even a book or two under his belt, he's still in demand, with his Spike Milligan, Billy Connolly, Bill Hicks-influenced style belying a (somewhere deep down) a man who cares about calling out society's ills and making change.

Sound good to you? Share this page on social media and let your friends know about Frankie Boyle at Edinburgh Playhouse Theatre.