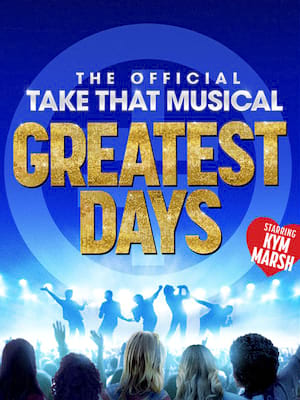 The brand new Take That musical!

Let it shine on stage!

In celebration of 30 years since hitting their first number one with the single Pray and the release of their brand new hit movie of the same name, comes this exciting new musical from Gary Barlow and Tim Firth, featuring the songs of Take That! Soundtracked by 15 of the band's biggest hits, Greatest Days (formerly known as The Band) is set to be a heartwarming musical of love, loss and laughter that recreates the sheer joy of experiencing your favourite band live!

It's the 90s and the band is at the top of their game, as are five best friends who live for them. Catching up with them 20 years later, we follow their reunion as they head off to see the boys one last time they'll Never Forget!

Sound good to you? Share this page on social media and let your friends know about Greatest Days at Edinburgh Playhouse Theatre.