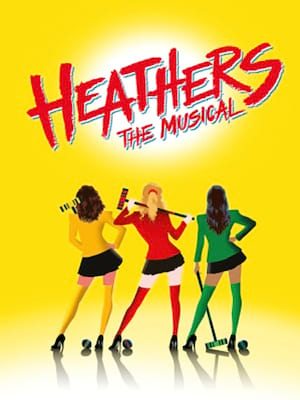 The show is packed with talent performed with huge zest

Listen up Corn Nuts, after a sell-out West End run in 2018 Heathers is heading out on a UK wide tour in 2021! An uproarious and joyous adaptation of the 1988 cult-classic, this is a high school musical with a difference. So grab your scrunchies and croquet mallets, this is one that would be deadly to miss...

Dear Diary, my teen angst has a body count - the story of Heathers

Heathers is the story of Veronica Sawyer and her inner turmoil as she traverses a high school ruled over by an intimating trio of scrunchie loving dictators - the Heathers. Consisting of Heather Chandler, Heather McNamara and Heather Duke, they stalk the halls of Westerburg High with an iron fist, verbally and mentally destroying anyone who gets in the way of their carefully guarded hierarchy.

But when the mysterious JD comes to class, Veronica may have found herself an ally in her hatred - albeit one with murder on his mind. Pitch-black and raucously funny, its a no-holds-barred look at the social strata of high school and the fate of anyone who might rally against it.

With a raft of songs including the infectious 'Candy Store', 'Dead Girl Walking', 'My Dead Gay Son' and many more, this bonkers adaptation will have you rolling in the aisles as Veronica steps up to defeat the Heathers once and for all.

Dear Diary, whether to kill yourself or not is one of the most important decisions a teenager can make, the next one is whether to go to Heathers The Musical on the West End - and if you want the short answer, I say yes!

I haven't even seen it yet and I love it more

Sound good to you? Share this page on social media and let your friends know about Heathers at Edinburgh Playhouse Theatre.