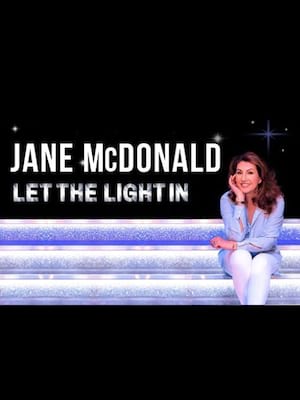 ...Jane captured the hearts of millions of avid viewers with her professional voice and down to earth humour

One of the UK's best-loved entertainers, Jane McDonald first captured the nation's hearts with a role on the BBC 1 docusoap The Cruise in the late 90s. After the release of her eponymous debut album in 1998, she began carving out a mainstream showbiz career with appearances as a special guest on the National Lottery, a presenter on Loose Women, and most recently as the star of the 2017 travel series Cruising With Jane McDonald, which won Jane her first BAFTA.

After sell-out tours in 2018 and 2019, the plucky Northern songstress hits the road on the 2022 Let the Light in Tour. Pulling out all the stops, she'll be performing career-defining hits from the past as well as all-new original material, bolstered by a brilliant backing band and spectacular production design. To top it off, she'll regale her fans with insightful stories and rib-tickling anecdotes.

Sound good to you? Share this page on social media and let your friends know about Jane McDonald at Edinburgh Playhouse Theatre.