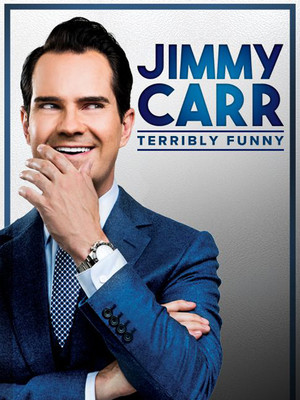 Jimmy Carr is back with a brand new show that takes on political correctness, a concept he claims is about as useless at a comedy gig as health and safety at a rodeo. Join Jimmy as he explores blue, taboo and sordid themes with his trademark sharp wit. One thing's for certain, the subjects might be terrible - but the jokes won't be!

Known for his beaming smile and slightly odd laugh (hoo hoo hoo!), Jimmy Carr is one of the best British comedians on the circuit today. And as if constantly touring through the UK and rest of the world doesn't keep him busy enough, Carr is also a constant sight on the evening telly as he hosts - and is a regular participant in - some of Britain's favorite comedy game shows. His clean-cut appearance contrasts strongly with his deadpan, dark comedy, and if you haven't seen him perform live yet, you're in for a real treat.

90 minutes with no interval

Sound good to you? Share this page on social media and let your friends know about Jimmy Carr - Terribly Funny at Edinburgh Playhouse Theatre.