Sorry! You missed Priscilla, Queen of the Desert at Edinburgh Playhouse Theatre 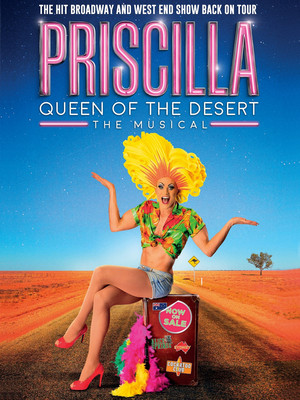 Priscilla, Queen of the Desert

Why See Priscilla, Queen of the Desert?

FROM DOWN UNDER TO THE WORLD!

Starring Strictly Come Dancing winner Joe McFadden! Two drag queens, one transsexual, a campervan and the journey of a lifetime! Priscilla Queen of the Desert is a sassy and sensational spectacle and a light-hearted look into friendship and forgiveness. Adapted from the Oscar award-winning film, the stage musical is big and bold and deliciously outrageous. With all the best 70s disco hits, a host of wonderful characters and spectacular and vivid costumes from a kaleidoscopic dreamscape, Priscilla Queen of the Desert is a voluptuous and veritable multi-sensual feast. Strictly Come Dancing star Joe McFadden stars in this glamorous production - don't miss out as Priscilla makes her way around the UK on tour!

Priscilla Queen of the Desert is a feel-good extravaganza that has dazzled and delighted audience all over the world and received a multitude of awards. In its country of origin, it won five Australian Greenroom awards. It won an Olivier award and the Whatsonstage.com award for 'Best New Musical' in London, a Tony award in the US, 6 Toronto Broadway World awards and a Toronto Theatre Critics award in Canada, and 4 DAPA awards in Italy. Enjoy a non-stop parade of dance-floor classics including Hot Stuff, I Will Survive, I Love The Nightlife and Finally!

WHAT'S PRISCILLA ALL ABOUT?

Drag queens Tick and Adam and transsexual Bernadette, accept a gig in Alice Springs for a spectacular Sydney-based show. The three friends hop aboard a run-down old bus, fondly nicknamed Priscilla, and set out on an adventure into the Australian outback. But the jolly jaunt is not without its wobbles, as the trio encounter hospitality, hostility and their own prejudices, and ultimately becomes a journey into the heart of friendship and family, love and learning, and, undeniably, all things fabulous.

Priscilla first opened as a stage musical in Sydney 2006. Adapted from Stephen Elliott?s 1994 film The Adventures of Priscilla, Queen on the Desert, the smash-hit extravaganza has become one of the most successful musicals to come out of Australia. The show boasts over 500 award-winning costumes and 200 gravity-defying head-dresses.

Two hours and 30 minutes with one 15 minute interval

Be prepared for the wild and fantastic in this wonderful spectacle of costumes, colour and musi

Priscilla focuses on both the highs and lows of drag life and somehow manages to be deeply touching in between the crude and camp...

I saw the show yesterday & have to say it is possibly the BEST show I have... more

I took my mum to see this show for her 65th birthday and she was the first... more

Sound good to you? Share this page on social media and let your friends know about Priscilla, Queen of the Desert at Edinburgh Playhouse Theatre.