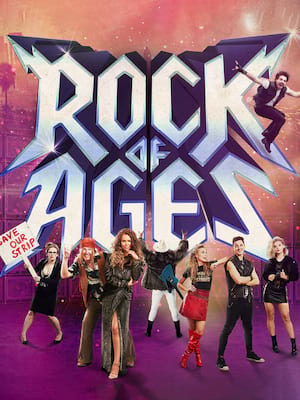 ...the hair-metal jukebox musical Rock of Ages is back - and it's still nothin' but a good time.

Why See Rock of Ages?

Tease your hair and dust off your leather trousers, because it's time to return to the power rocking days of the '80s as Rock of Ages screams into town! The hit musical is on tour once more, bringing you the biggest and best hits of the decade, including tunes from Styx, Journey, Bon Jovi, Pat Benatar, Twisted Sister, Steve Perry, Poison and Europe, all wrapped up in a thrilling tale of one rebellious rock club holding out against the man. First seen on Broadway back in 2009, with a London bow in 2011, Rock of Ages has since travelled the world and seen a big-screen adaptation starring none other than Tom Cruise.

Flaming riffs and driving drums punctuate the story of Drew, an aspiring rock star, and Sherri, an aspiring movie star. Sparks fly between the dreamers, but when the strip is threatened by developers they must come together to save their home and stick it to the man.

Seen Rock of Ages? Loved it? Hated it?

Sound good to you? Share this page on social media and let your friends know about Rock of Ages at Edinburgh Playhouse Theatre.