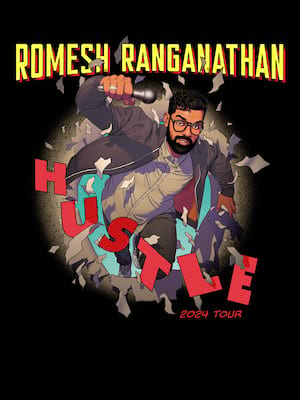 Romesh is ready to Hustle in his new show!

Romesh Ranganathan returns to the stage with his latest new standup show, Hustle. The dry-witted comedian and host of the hugely popular podcast Hip-Hop Saved My Life is on the road to deliver his hilarious insights into the human condition, asking the hard questions - and providing no real insights!

Nominated best newcomer at the 2013 Edinburgh Festival, Ranganathan has since been a regular on TV and radio panel shows such as 8 Out Of 10 Cats Does Countdown, Would I Lie To You and BBC Radio 4's The Museum of Curiosity. He also stars in a number of his own series on BBC, Sky and Dave, including docu-comedy Asian Provocateur exploring his Sri Lankan Roots and humorous current-affairs talk show The Ranganation.

Sound good to you? Share this page on social media and let your friends know about Romesh Ranganathan at Edinburgh Playhouse Theatre.