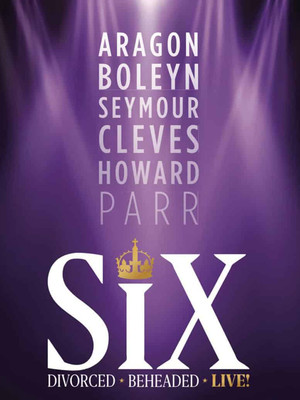 The queens are taking on the rest of the UK!

The Queens are back - and they're taking on the rest of the UK! With five Olivier award nominations and a 2022 Tony Award for Best Original Score, Henry the VIII's hunt for an heir and his love of beheadings has made him one of the most famous monarchs in Britain's history, with the tale of his six unfortunate wives the stock of any school history lesson. Created by Toby Marlow and Lucy Moss, Six tells the story of these women via a brand new musical!

After a sell-out run at the Edinburgh Fringe and West End run back in the autumn of 2018, SIX now returns to bring this high-octane concert-style show across the country. With songs like "Ex Wives", "Haus of Holbein" and "Don't Lose Ur Head" taking inspiration from contemporary pop to re-write history, Six brings a night packed full of fun, laughter and six sassy Queens ready to tell their story.

Recommended for ages 10 years and older

One hour 20 minutes with no interval

The transformation of the wives into a modern-day girl pop group, vying for X factor type glory...is a brilliant adaptation

The Spice Girls might have reunited but they've got a run for their money in the unexpected form of Henry VIII's wives. But unlike their static portraits (and positions in history), these girls can sing and dance and put on a dazzling performance.

Seen Six? Loved it? Hated it?

Sound good to you? Share this page on social media and let your friends know about Six at Edinburgh Playhouse Theatre.