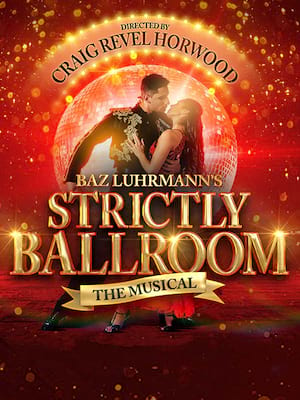 Well, you can dance any steps you like... that doesn't mean you'll win.

Tens across the board! The toe-tapping musical adaptation of Baz Lurhmann's 1992 indie film is stepping out across the UK this year, with choreography and direction from the one and only Craig Revel Horwood.

A cult classic, Strictly Ballroom is glittering, wacky love story set in the world of Australian Ballroom dancing, centring on Scott Hastings, a second-generation competitor whose penchant for adding original moves to his performance leads him to seek out an unlikely partner in the shape of Fran, a shy beginner who teaches him some steps of her own.

Featuring a cast of hilarious characters, a solid story and classic pop songs like 'Time After Time' and 'Love Is In the Air' as well as original compositions David Foster and Eddie Perfect, Strictly Ballroom proved a smash hit when it debuted at Sydney Lyric Theatre in 2014 before smashing it in the West End back in 2018.

What is Strictly Ballroom About?

Australian ballroom dancer Scott Hastings' style is unconventional to say the least. Following the latest fiasco of a competition when Scott started introducing his own steps, his dance partner leaves him, leaving him high and dry with only weeks before the big Grand Prix Dancing Championship. Desperate for a new partner, Scott picks the equally unconventional newcomer Fran, and over the course of their practice sessions, a romance begins to blossom. But can this unusual pair prove the doubters wrong and triumph at the Grand Prix?

This is Panto meets Priscilla Queen of the Desert, with some fantastic dancing talent thrown in for good measure.

Check out what Kitty thought of Strictly Ballroom when she saw it in London!

Loved every single minute! The dancing is fantastic especially the flamenco... more

Really disappointed with last nights performance, nothing to do with the... more

Sound good to you? Share this page on social media and let your friends know about Strictly Ballroom at Edinburgh Playhouse Theatre.