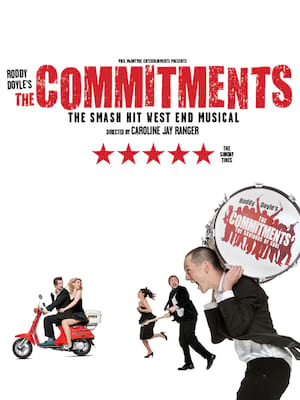 "The musical we've been waiting for. So good I almost wept."

Why See The Commitments?

And now, The Commitments!

Based on Roddy Doyle's 1987 novel (and subsequent film) and adapted for the stage by Doyle himself, The Commitments is the story of a rag-tag bunch of musicians who, along with a shared love of Motown, hope with a little hard work, to become the finest soul band in Ireland.

Featuring sweet-soul classics from the Motown songbook such as 'Papa was a Rolling Stone', 'Think' and the riotous 'Try A Little Tenderness', The Commitments is a sarcastic, smart and soulful comedy that will surprise even the biggest musical naysayer.

Wannabe musical impresario Jimmy Rabbite is surprised by the responses to his classified ad in the Hot Press. The result of auditions turns up an unlikely lot, but un-fazed, Jimmy sets out to do the impossible, train these amateurs into a soul band!

Set against the rainy concrete bleakness of late 1980's Dublin, the raucous Commitments learn to play together, whilst struggling to contend with all the chaos that comes along with success, including in-fighting, sparring egos and er.. Strengthening inter-band relationships?

This is a visual and passionate show, capturing the glee, fiery madness and hope that comes with being in, and being with, this motley crew of a soul group.

The Commitments is part of a trilogy of Roddy Doyle novels, the second and third being 'The Snapper' and 'The Van.'

The Commitments is suitable for audiences aged 12 and upwards

Two hours and 15 minutes with one interval

Sound good to you? Share this page on social media and let your friends know about The Commitments at Edinburgh Playhouse Theatre.