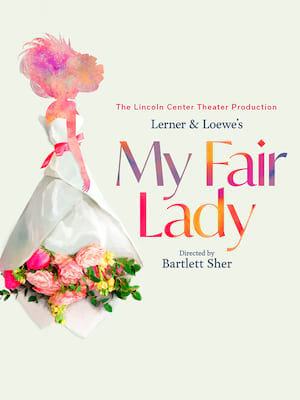 Why See My Fair Lady?

Following a highly acclaimed Broadway run back in 2018 and its recent West End run, My Fair Lady is embarking on its UK tour! Directed by Tony-winner Barlett Sher (the man behind 2018.'s The King and I revival at the London Palladium) Eliza Dolittle and her transformation from flower girl to society beauty is refreshed for a new generation. Including some of musical theatre's most classic standards, ('I could have danced all night' and 'Wouldn't it be Loverly' to name a few), and a rags to riches story that includes romance, drama, and a day at the races - we think this one is going to sell like hotcakes - or should that be hot flowers?

Regarded as one of the greatest musicals of all time, this jubilant originally premiered on Broadway in 1956, with Julie Andrews in the role of Eliza, and won six Tony Awards, and was subsequently adapted for the silver screen, with the cast led by Audrey Hepburn and Rex Harrison.

For Professor Henry Higgins, a person's voice is of the utmost importance. A student of phonetics, he holds the opinion that with the right accent and tone of speech, anything is achievable. To prove his point, he wagers a friend that he can teach cockney flower girl Eliza Doolittle to speak 'properly', and then present her as an upper-class lady at a high society ball. So the pair's lessons begin, but little does Henry Higgins know, that project Eliza Dolittle is going to change his life forever.

While Julie Andrews won huge acclaim for her Eliza on Broadway, she was never in contention to reprise the role on film. Audrey Hepburn was one of Hollywood's brightest stars, and as producer Jack Warner wrote in his autobiography, "In my business, I have to know who brings people and their money to a movie theatre box office." Audrey Hepburn's singing was then famously dubbed in the final cut of the movie.

One of the great British musicals brought to life with a marvelous cast... more

An absolute joy for 3 sublime hours. This has been beautifully cast, beautifully... more

Sound good to you? Share this page on social media and let your friends know about My Fair Lady at Edinburgh Playhouse Theatre.